Animated map shows how cats spread across the world

If you’re experiencing worse seasonal allergies than ever before, you can thank climate change

Sophie Michelle Does LIVE Performance of “No Brakes” From Brat!!

On this episode of BEHIND THE FAME, we have the hilarious Grace Helbig and Mamrie Hart in the studio. We talk with Grace and Mamrie about their careers as comedians, hosts and content creators as well as their infamous podcast “This Might Get Weird”. Grace and Mamrie have been in entertainment for quite some time now and created a long lasting friendship many years back. The entertainment industry, more than any other, can create a difficult space for genuine, real relationships. We talk to them about that and how the two came together many years ago. Grace and Mamrie got real with us on what it takes to reach the successful level they have climbed to not only together, but separately as well. “This Might Get Weird” has become so successful as a podcast that it’s leaving the recording studio and hitting stages around the US for a tour! Grace and Mamrie discuss the tour, their fans, and of course how to handle their romantic relationships as entertainers in the public eye. Listen/watch this episode of BEHIND THE FAME to get the inside scoop and everything Grace and Mamrie are up too right now!

Grace Helbig is a comedian, actress and YouTube personality. She’s the creator and host of her podcast “Not Too Deep” and more recently, “This Might Get Weird with Mamrie Hart. Her YouTube channel as 2.8 million subscribers.

Mamrie Hart is also a comedian, actress, writer and performer. Aside from co-hosting her podcast “This Might Get Weird” with Grace Helbig, she gained massive popularity through her YouTube show “You Deserve A Drink”. She has won not one, but two Streamy Awards for the show.

Grace and Mamrie’s “This Might Get Weird” Tour kicks off on August 16th! You don’t want to miss these two hilarious women do their thing live on the road.

Sophie Michelle Does LIVE Performance of “No Brakes” From Brat!!

A LOT Of Cold and Snowstorms Looking Likely! How Will This Effect You? And How long Will it Last?

A LOT Of Cold and Snowstorms Looking Likely! How Will This Effect You? And How long Will it Last?

Indiana Jones and the Dial of Destiny | Official Trailer

Did China use TikTok to attack GOP? 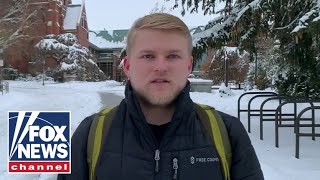